Leonard Cohen: Bio from the songbook "New skin for the old ceremony" 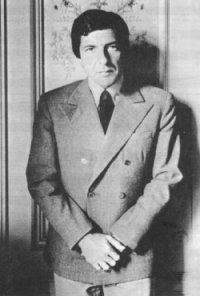 Leonard Cohen is something of a popular music renaissance man. As well as being a highly polished songwriter and a spellbinding performer, Cohen is widely acclaimed novelist and poet. He is a native and currently a resident of Montreal, Canada who has spent a lot of times overseas. He lived for some time on the Greek island of Hydra but returned to Montreal to renew what he himself describes as äneurotic affiliations.ô Similar in approach to chanteurs like Jacques Brel, Cohen has an understandably large and loyal following among Europeans as well as Americans. Appropriately, a number of his works have been translated into as many as 20 languages.

Leonardĺs two novels, The Favourite Game and the brilliant comic Beautiful Losers, are published by McClelland and steward in Canada and by Viking Press in the United States. Also published are six volumes of Cohenĺs poetry : the best-selling Spice Box of Earth, Let Us Compare Mythologies, Flowers for Hitler, Parasites Of Heaven, Selected Poems, and Energy of Slaves. The U.S. editions of both of the novels have had several printings and Beautiful losers, in particular, has sold hundreds of thousands of copies. Cohen first gained recognition for his writing in Canada in 1964 through a national Film Board of Canada documentary entitled Ladies and Gentlemen ... Mr. Leonard Cohen. Since then a CBS-TV program, "Camera Three," and a film of one of Cohen's European tours, entitled Bird On A Wire, have been devoted to him. The latter film, a revealing view of Cohen's touring troupe and the emotional upheaval that accompanied them throughout Europe, serves as some indication of the special spot which Cohen and his songs hold in the hearts of his fans.
For all this, however as a writer Cohen was more of an artistic than a popular success until he began to make records. He had just returned from an extended stay abroad and was caught unaware of the expanded expressive possibilities that had developed within pop music in the mid-sixties. During a stopover in New York he heard Judy Collins perform in a club and realised that he could write unconpromised material for her and others like her. His classic "Suzanne" and "Dress Rehearsal Rag" appeared on Collins In My Life album and Cohen's reputation as a songwriter had been made. John Hammond, Sr., Vice President, Talent Acquisition, Columbia Records, thought Cohen himself should be heard doing his songs and signed him to an exclusive recording contract with the label. His debut LP Songs Of Leonard Cohen, was released in December, 1967. Before the completion of the album Cohens only flirtation with music was as a member of a strictly amateur country group in Montreal called The Buckskin Boys. Thirteen years later, he was busy assuring himself of a spot as one of the premier singer-songwriter-poets on the music scene. Today, Cohen discovers that poetry, fiction and music continue to be interconnected. what he begins as a story may later reveal its true medium as a song, and vice versa. He had also written music for film. and his songs were used with great effectiveness in McCabe and Mrs. Miller, the movie directed by Robert Altman. Cohen has recorded a total of five albums for Columbia, the most recent of which is entitled New Skin For The Old Ceremony, released in October 1974. Following the completion of the LP, Cohen embarked on one of his rare tours of the United States, proving that he has lost none of his charismatic stage quality since his last concerts in America five years earlier.

Between albums, Cohen works on a new novel as well as other projects. Although much of his work, recorded and written, revolves around romantic themes, Cohenĺs concerns extend beyond charting the affairs of the heart. He recently returned from the front of Sinai in Israel, where he performed for the troops. As an inhabitant of many countries and a universal artist, it is not surprising that Cohen expresses regret at not having the opportunity to entertain both sides.